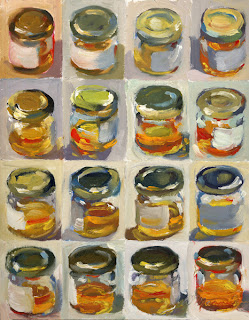 Diane Mannion, TEN MINUTE CHALLENGE 2012, 10x8" oil
This is a repeat of the Daily Paintworks Challenge which I painted in February, 2011.  Each jar is painted in TEN minutes!  The difference with this painting is the size of the brush.  2011... #2.  2012...#6!  A number two bristle is about a quarter of an inch wide... and a number six is about a half inch.  Some jars were painted inside and some outside lighting was, but it's the same little jar I painted last year.  And I'll post this one in the Carol Marine's new Ten Minute Challenge Again.  Here's last year's version: 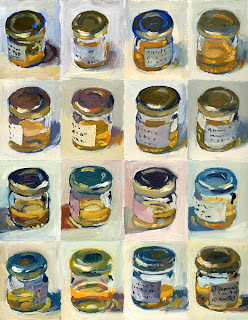 Diane Mannion, Ten Minute Jars 2011, 10x8" oil
Great exercise!  Took a little longer last year to add the lettering.  2011 is crisper because of the smaller brush, but 2012 is more painterly and less of an illustration.

Great challenge to repeat especially with a different brush! Love it