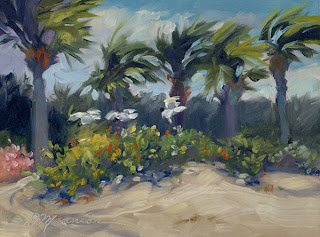 Diane Mannion, LAUGHING GULLS, 6x8" oil
I noticed some laughing gulls (yes, the ones with the black head are called laughing gulls!) flying over a bush with yellow leaves.  The wind was strong,  they hovered in place like they were attached to the bush with strings.  They floated like kites... a beautiful sight which went on for several minutes.  I painted three birds here, but there were about a dozen, laughing gulls and other types, all taking turns in line to hover over the same bush.  There may have been a swarm of insects hatching... but I like to think they were just playing with the wind.