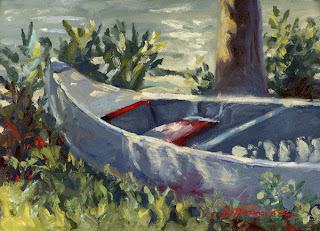 Diane Mannion, Snook Canoe, 6x8" oil
Here's one I started on location, put aside (instead of wiping it off) and decided a few weeks later there was something about it worth saving.  So spent a few hours ( instead of the few minutes I thought it would take!) embellishing and polishing and attempting to make it work.  It's still not the masterpiece I had envisioned, sigh.  Just posted it to show that not every painting is a winner.  Some are simply practice for the next.