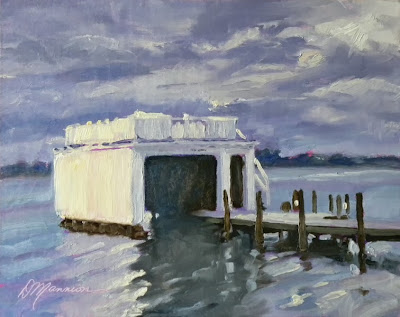 A few years ago, I did the best painting of my life of this boathouse.  While packing things in the car someone handed me a bag of oranges.  Half way to Sarasota, I freaked out when I realized my painting was still on the roof of the car.  Stopped, looked, of course it was gone.  Drove all the way back to the Preserve... no sign of it.  Figured it must have flown up and landed on someone's windshield, yes, it always rains art in Sarasota.  Or maybe it stuck to the wheel of a truck and went to Alabama.  Never found it.

Drove to the Bay Preserve to meet some artists friends this morning, but they were smart enough not to go out when huge rainstorms were predicted.  Took snapshots, memorized the atmosphere and headed home before the deluge.

It's never the same working from photo reference even though the location was fresh in my visual memory bank.  Took much longer than working on location.  Finished it anyway and thought it ine, not as fine as the best-painting-of-my-life, but would do.  This is when the haunted or at least jinxed thing happened.

As I walked outside to photograph it... it flipped up in the air and attacked my teeshirt.  Here's proof. 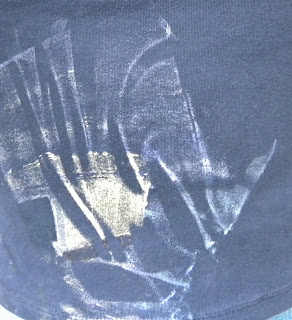 All my bold and spontaneous brushwork, my brilliant highlights... gone!
Reworked several passages and saved it, but it's not the same as it's original glory.
Think I'll stay away from that darn boathouse, at least for awhile. 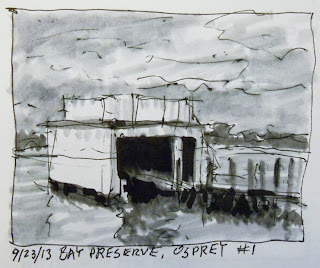 Great story and great painting even though it attacked you. also captured the storm clouds beautifully.

Thanks, Judy! Art's always an adventure, never know what will happen next. Part of the fun.

Diane, I laughed out loud reading about your misadventures with the haunted boathouse! particularly when it attacked your t-shirt! Still a great painting though!