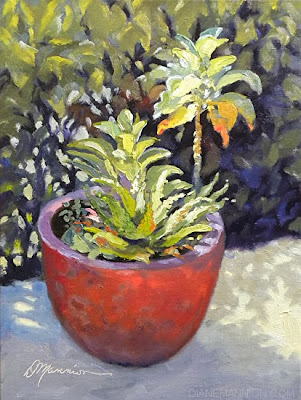 This started as a class project and almost ended as a wipeout!  After demonstrating how to simplify composition into a few areas for massing, had artists go outside and collect thumbnail sketches and notes.  These would be turned into a small study, mostly from memory back in the classroom.  I attempted the same project... along with my iphone camera!  Also suggested students take a snapshot if they wished to finish the painting later.

Managed to get a first stage block-in for the class demo without using photo reference, planning on wiping it out later.  But there was something intriguing about the light.  Sometimes, it becomes a learning experience to see if a painting can be saved.  Next day, working with photo reference, I rescued this painting from the wipe-out rag.

I often see students give up too soon.  Perhaps, it's resistance to breaking through to a new skill level... growing pains.

Don't give up too soon.  Give it time.  Be gentle with your creative self.