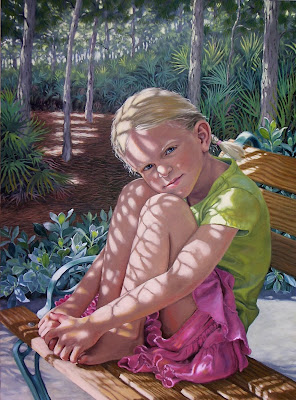 Warning: Lots of horn-tooting ahead!

Last night this painting won the Bowles Award for Outstanding Portraiture at the Greatest Hits Exhibition in the Punta Gorda Visual Arts Center.  All the paintings in this show had won prizes in previous shows.   Rachael is Five had a ribbon from the Venice Arts Center and had been exhibited in a Punta Gorda National Show.

This is the second Bowles Award for my portraits, first was for Mahogany Woman which also took top prize in the Woman Painters of the SE exhibition at the Corse Gallery, Jacksonville, Florida. 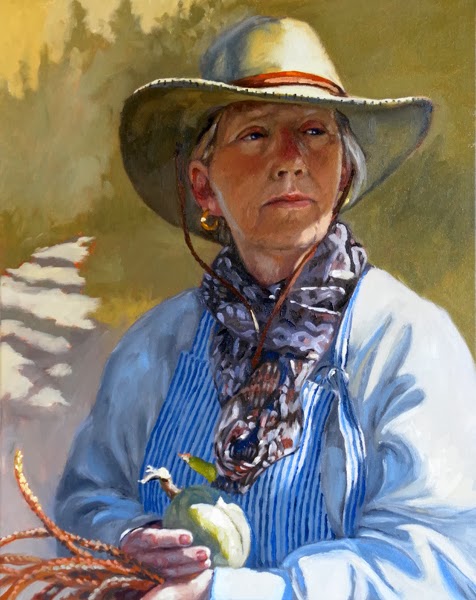 Artist note:  Here's a link to the Rachael is Five demo.

"Rachel Is Five" is exquisite.
You should be blowing your horn. The competition must have been fierce!

Thank you so much, Shirley. Yes, the Punta Gorda Visual Arts Center is the best in SW Florida! The exhibition is fabulous. That I was given an award is an honor.

this painting is ASTOUNDING!!! i've been looking at it for the last 5 minutes and thank you so much for sharing your process!!! congratulations on a much deserve recognition!! outstanding work!

Thank you Suzanne! Glad you liked my demo.

STUNNING work Diane!! Literally breathtaking! I love everything about it but particularly the play of light - always something you do so well! I also love the Mahogany Woman. Congratulations on winning the award!

Thank you, Wendy! This painting was done a few years ago even though it just won an award. My style is looser now. Seem to go through cycles of tight/loose. Tight sharpens skills, loose expresses energy. Have to find a place somewhere in the middle.

Diane, I knew from the first moment I walked down the hall at the VAC, and saw Rachael's portrait, that is was the winner it now is! It is far more eye-catching than this photo shows. I am SO proud of you! And now this is #2...I'm sure number three is right around the corner!