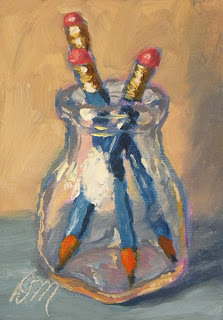 The small size of these paintings is allowing me to create a series at a rapid speed.  By imposing a loose set of rules, such as scale and size of objects (a horizontal landscape would not fit in),  I set my own limits for these 30 snippets... and thought I was in control.

A lot of glass, candy!  Some flowers.  Still mostly concerned with light, color, and reflections.  But some things happened that were not planned.

A few objects have taken on a life of their own... Mrs Butterworth and the soon to be introduced, Mr Planter Peanut.  A few more figurative glass pieces may also join the party.  It's as though the subjects are telling me what to do.

So how does my Blue Pencils Snippet fit in?  Pencils are creative tools, drawing, writing, counting, making lists.  But these blue pencils have a lot of meaning for me.  They belonged to my father who encouraged me to draw and write.  A small connection to the past.

But I'll keep them out of Mrs Butterworth's reach.  Would hate to see her teeth marks on them.

Isn't it wonderful how your paintings take on a life of their own! This is a sweet painting made all the sweeter because of the meaning behind it for you.

I am hoping to make my first ever trip to the U.S. in the next 2 years so maybe I will have to add Florida to my itinerary to take one of your plein air classes and take you up on the fossick around Arcadia was well!

Loved the visual image of Mrs Butterworth's teeth marks in the pencil!

Thanks, Wendy. Paint with you soon.

I love it when the paintings speak and suddenly a new path is created. You just never know where you will go.

Love this snippet and the story! And looking forward to more adventures from Mrs. Butterworth.

Thank you, Linda. I really appreciate hearing from you! Mrs Butterworth has been nagging me to get back to her story. Will soon.

I love this for many reasons but especially because it is such a simple idea…but such a complex painting. So well executed…it showcases not only your creativity but all your skill.

I am very attracted to tha colors and subjects in this painting. Well done!

Thank you, P Vincent and Terri! Your comments make me smile.

Maria, thank you! It was not an easy one for some reason... but so glad you like it.