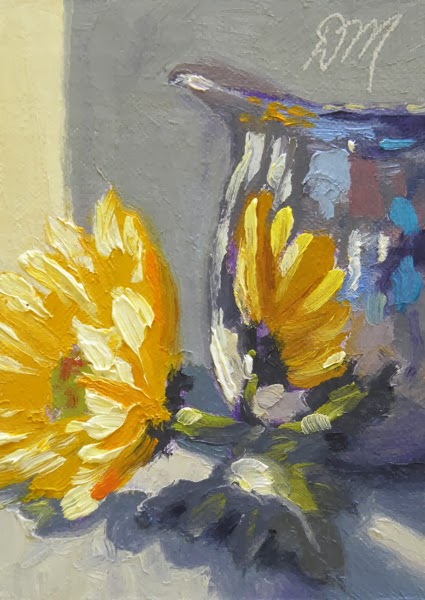 Recipe for SHINY THINGS
Shiny objects reflect what's around them... distorted by the shape of the object.
The pitcher is almost invisible except for it's shape and what's reflected on its surface.
Instead of painting the pitcher, paint color masses and shapes.
Squinting makes it possible to see simplified shapes and values appear like pieces of a jig-saw puzzle.
The daisy was both reflected and distorted by the shape of the pitcher.
The darker and more purple-gray color of the pitcher shows where nothing close is reflected... such as the inside of the lip.
The duller the shine, the more the objects body color will tint the reflections.  For example, if the pitcher had been copper or brass, the daisy reflection would have been more orange.
A Few Painting Tips
1.   Mix puddles of color on palette before applying.
2.   Put strokes down and leave them as much as possible.  A nudge here and there is fine, but no petting.  Only three or four strokes for each loaded brush.
3.   Pull paint off between strokes with rag, paper towel, or tissue.  Do not clean brush with mineral spirits or other solvents (only to clean brushes later).
4.   Use a dab of linseed oil if needed, for stroke to flow.
5.   Hold brush parallel to the surface to vary application technique, as well as holding it like a writing instrument.

It's difficult putting the art of observation and painting into words.  Best advice... set up some shiny objects and paint!

Great tips to remember Diane!
It's easy to get caught up in all the little shiny things we see and over do it....I'm good at that part :(

I have enjoyed all of your sweet paintings and fun commentary :)

Thank you, Renee! Glad you enjoyed my blog... means a lot to me.