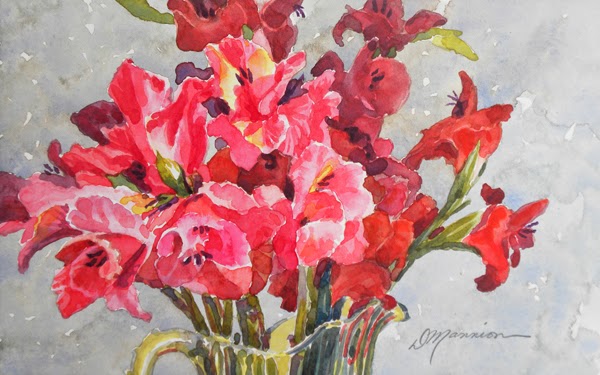 Another painting on Arches hot press.  Attempted to put strokes down with minimal blending, let them puddle or flow where they would.  Happier with this one than yesterday's post which I think I'll try to lighten and rework, then repost.

One good thing about insomnia is watching watercolor demos and picking up tips here and there.  Hundreds of videos on Youtube, most pretty awful, but once in a while, a good one.  Later, I'll list a few favorites.  Anyhow, I learned about Mr Clean's Magic Eraser and how it can be used as a tool to lift areas.  Will buy one today, see how that works and report on that later also.

I did myself a favor and took every tube of watercolor and made a Lift-ablility chart.  Used Arches 140 lb cold press paper because it seems to be my favorite.  Painted each color in a line from dark to light tint.  Then took clean water on a brush and stroked the center and lifted off with tissue.

Learned a lot about the colors I own, some of which I've never used before... some were samples, some were gifts.  I left out the metallic and iridescent colors, will test later because I'm not using them during this Challenge.  Have a lot of tubes with mysterious  names, like what in the world is the color of Moonglow?  Now I know!

I really recommend making a chart like this!  It's clear to me now which colors are more transparent or opaque... and most importantly for me... which are easier to lift!  Also learned which were clear and which were grainy.  Once in a while, changes are helpful, softening edges for example, so lift-ablility is important.  Here's a snapshot of my chart.  Go make your own! 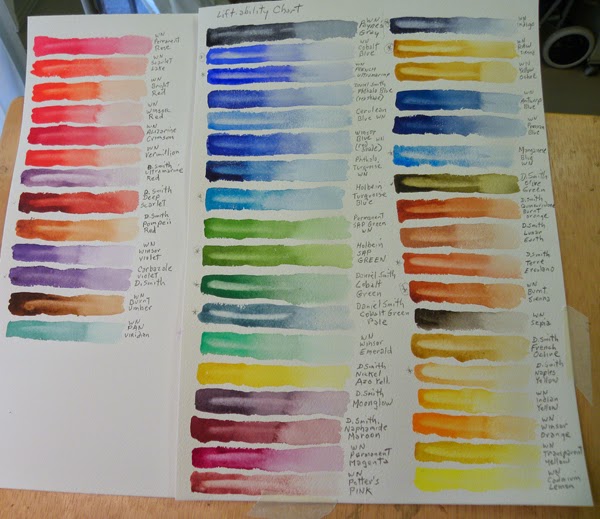