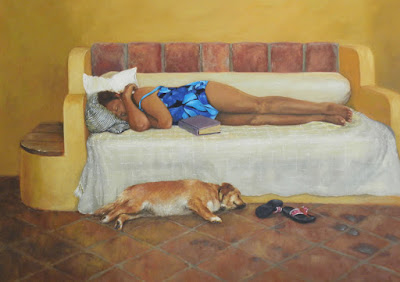 Someone just asked about this painting and I realized I had never posted it, so here it is a year later.

This was a special commission, sensitive portrait of someone's sister who had recently passed.

The project was to use the client's photograph and not make many changes.  I had suggested a window looking out to the ocean or a plant on the shelf, but this was the sister's favorite spot and was asked not to change it.

Judy's book was open in the photograph, I closed it, end of story… and put her name on the spine.  I emphasized the wet footprints of Judy and the dog which were drying and disappearing on the right side.  And did not notice until later that the white pillow behind her looked like angel wings.

Really sad but hopefully my painting has brought comfort to the family and that this young woman is forever in her favorite spot.