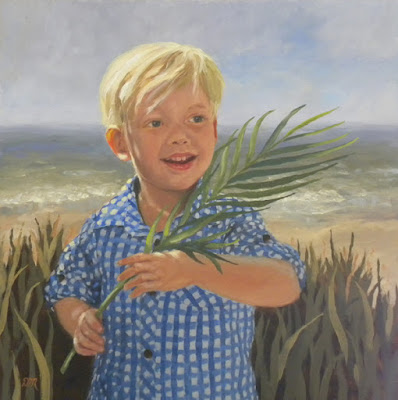 Palm Instead of Oats
(#3 of 8 commissions)

Jack's about two years old.  Loved the sunlight glowing through his ear.  At first had him blowing soap bubbles but client wanted him playing with something more natural for the beach.  Easy change.

Sometimes props help a child relax while having their photos taken.  Soap bubbles were replaced with sea oats, thought the golden color would work well.  Well!  While researching sea oats online I discovered there's a problem with sea oats vandalism on coastal sand dunes.  It wouldn't be a good idea having the boy holding them!  So I changed it to a palm frond, instead.  Plenty of those around and they're not endangered.

I thought the checkered shirt would be a problem but actually enjoyed painting it.  It also added an interesting pattern to the group of four.  Kept the Gulf and beach location the same, these four will hang together on the top row, four older children on the bottom row may have different backgrounds (haven't gotten that far yet).