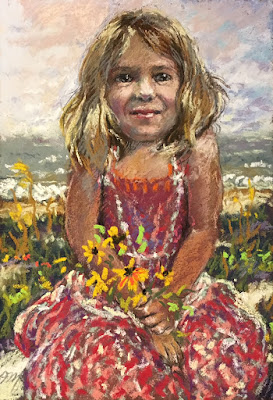 Can This Pastel Be Saved?

Maddie is usually sitting behind the front desk with her mommie drawing pictures for us to take home after our figure drawing class.  She's a typical four year old who can't sit still.  One night I asked her to pose for me after the model had left and the model stand was still lit.

Snapped a few photos but she had the usual squirmy and silly four year old charming attitude and tried harder than she needed to.  Funny how children are when the camera's aimed at them!

One impish pose looked interesting so I thought I would do a quick pastel study.  Used an old sheet of dark brown Sennelier Pastel Card.  Worked up a block in, then decided to wash the pastel in for the underpainting with water.  DISASTER!

Was wondering why pure white showed up in the background, at first it was the white pigment, but no, it was the coating on the pastel paper!  Rubbed everything out and was ready to throw it into the trash bin.

Instead, I asked myself what do I have to lose?  Or can this pastel be saved?  Sprayed it with workable fixative and went to work.  Saved!  But barely.  Learned a lot from this exercise.  Always test the paper.  And for heaven's sake… work larger for portraits! 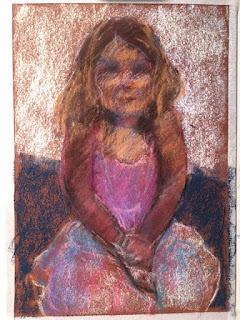 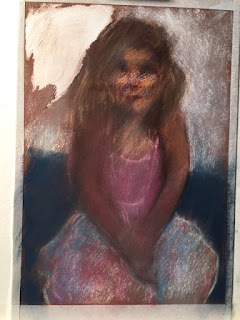