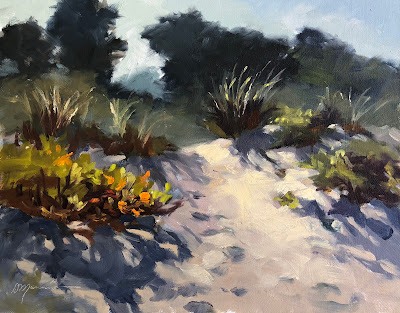 There's a place where I can set up my easel and turn in any direction and "see" a painting.  Have been painting there for about ten years early in the morning with a painting buddy.  It's in Venice, Florida, not telling exactly where… but it's similar to many places along the Gulf Coast.

Seagrasses and foliage change from season to season, more orange and yellow ochre in winter, more blue flowers in summer.  Yes, seasons change in Florida.  High season is Christmas to Easter when the tourists crowd the roads.  Colorful beach umbrellas sprout like mushrooms along the shore, while sunburned figures bend searching for seashells and shark's teeth.

We set up and start painting early when the beach is nearly empty except for an occasional metal detectorist swinging an instrument back and forth, or a yogi doing a sun salutation in the dunes.  A few couples stroll along hand in hand.  Pelicans and seagulls squawk and dive while fishermen cast circular nets for bait.  A Great Blue Heron waits for scraps while white egrets with yellow-booted feet scurry in and out of the surf with their sandpiper friends.

After a few hours,  it's always a shock to snap out of the painting trance and be surrounded by beach blankets and curious onlookers.  And to listen again to how someone's aunt was a "real" artist!  By that time, the light has changed and we pack up and leave.

The painting above is titled Big Brave Morning because I painted with much larger brushes, #10, 12, and a two inch, instead of my usual 2, 4, and 6.  I mainly use synthetic bristle flats almost as stiff as a palette knife, both Rosemary and Silver Bristlon.  Centurion OP DLX panels in Raymar Panel carriers are great, 8x10" or 9x12" are right size for quick paintings, 5x7" and 6x8" for sketches and color notes.  The painting above was 11x14" on a Frederick's panel that I gessoed several times.

We still paint all summer down here even though it gets a bit hot or we have to break for hurricanes.  Once led a group called the Heatstrokes.  There's always a spot in the shade somewhere and a cool breeze by the shore.  But I'm not telling where my favorite spot is!