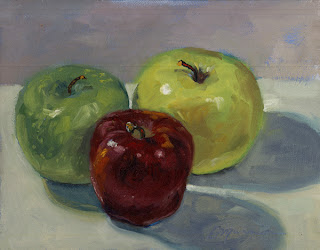 Diane Mannion, APPLES, 8x10" oil
Painted as a demo in the Punta Gorda Visual Arts Center session's last class today.  Although I often paint during class, some students wanted to just watch me paint and not work on their own projects.  Said they "understood" more by watching me paint now than if I had painted during the first class.  It's not easy painting with people looking over my shoulder but their positive comments helped.  And the classroom lighting is awful!  Set my portable Ottlite next to the apples for more dramatic cast shadows.  Resisted tinkering further and posting it "as is."
( I noticed a line that looks like a wrinkle on my canvas... it's caused by the scanner and is not on the actual painting.  I'll photograph the painting and replace the image later.)

I totally understand them wanting to watch and learn. I love to just learn from some of the painters on ustream. Those who let us know what they are doing as they go along especially. Then when I go back to my easel, I have some new information between my head and my brush!

Thank you, Laura. I was feeling guilty that I got to paint and "not" teach. But I was stopping to comment as I went along. I thought the students would learn more if they had been painting, instead. But they said they got a lot out of the demonstration. NEXT time, I'll only paint one apple, though.