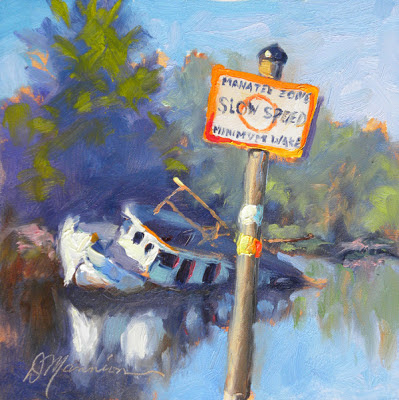 What Was I Thinking?  (or not)

Was this vessel sunk by a manatee?
This is an early morning quick studio study that evolved into a mini-painting lesson shown below.  Taking a few months off teaching but the "instructor's voice" still echos in my head while painting.  Thought I'd attempt to capture a few of those mental ramblings on index cards while I worked.  Get it all out, empty myself of the chatter.

The title was suggested by the sign, common in Floridian waterways, "Manatee Zone, Slow Speed, Minimum Wake."  And Minimum Wake reminded me of a writing quote from my English Major days... "Write when you're eyes are open but before you're awake."  So how does this tie to painting?  Sometimes, we "think" too much while painting and don't let it flow.  Teaching and studying keep me awake... but getting into the painting zone means shutting off the instructional chatter.  Dreama Tolle Perry put it beautifully and quite simply... "When you study, study.  When you paint, paint."

Could have painted this scene yesterday from life during my visit to the Navigator if I had set my easel on the end of a low-floating dock in full sun, a few feet away from my gator friend.  Instead, zoomed in with my iPhone and snapped away. 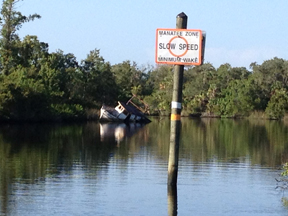 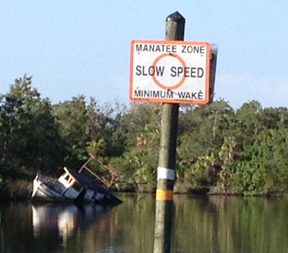 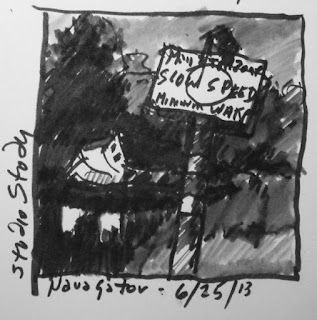 Main mass shapes, an exercise to "see" simple shapes.
Used tracing paper over thumbnail sketch.
An exercise I give to my students to get them to focus on the big picture, instead of details. 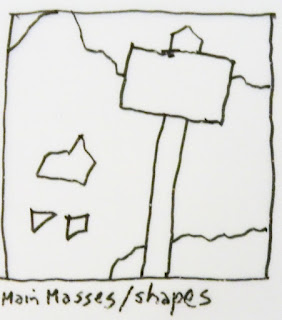 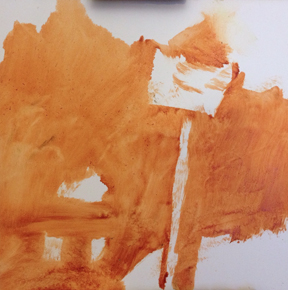 Second Stage:  Blocked in main colors, sky, trees, boat, and sign.
Kept loose, no detail at this stage.  Worked with values, lights and darks.
Also thought about color scheme... orange and purple and blue.
Did not use Gamsol or medium for painting.  Mixed colors from paint tubes.  Gamsol for cleaning brushes only!  And instead of cleaning brushes often... used several clean ones, or simply pulled paint off with paper towels (I love those sturdy blue ones found in the auto department.  Last longer and don't leave lint like other brands.). 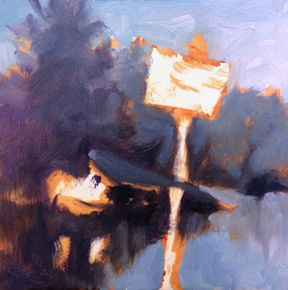 And again, the finish.  Notice how I changed things from the photo reference.  Moved boat so it showed on both sides of the sign.  Tilted sign for a less stiff composition (Hey, that boat could have bumped the sign before the manatee sunk it!).  Left a lot of the underpainting showing.  Put paint strokes down and left them alone as much as possible.  Mixed colors on my palette instead of "licking" them on the panel.  And let my visual memory of that morning dictate the color choices, instead of the photo.  (We are not giant copy machines, I always tell my students.)
Hope this mini-painting demo will be helpful to someone out there.  If it is... please let me know.
And beware of gators and manatees and over thinking and tinkering! 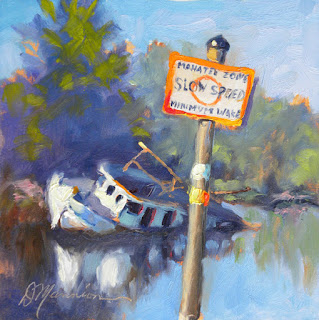 This is such a great painting! Only an artist would see the story there, and compose a painting to convey the scene. I think this would be a conversation piece, hanging in your gallery, or anywhere! Thanks for sharing the process too. I learn so much by seeing how others do their work.

Thank you, Katherine! I'm so glad you enjoyed it... couldn't resist such a fun subject.

Hi Diane! I really enjoyed seeing the process too! I also needed the reminder about not being a "giant copy machine!" :)
I have a question for you... When you are laying in the dark foundation underneath, how do you keep it from muddying up your lighter colors (such as the white) as you apply over the underpainting? Do you use acrylic first and then oil on top? Or do you let the oil dry a bit and then apply the layers of color on top? Thank you for this demonstration! I love the end result of this painting, such great colors!
Also, I have enjoyed the paint your pet challenge on DPW! :)
Kim

I'm glad this blog post was helpful to you! Writing on my blog helps me be a better teacher/painter and hearing from artists like you helps a lot.
To answer your question about putting color on top of colors without creating mud (which is simply a neutral... no such thing as mud!): There are three ways to lay on a brushstroke over another wet color...
1. Light touch. Sometimes with loaded brush held sideways.
2. Medium touch... wanting to pick up a bit of the undercolor. And leaving some undercolor untouched.
3. Heavy touch. Wanting to blend with undercolor to make another.

In some areas, all three techniques are used. Try to put a stroke down and leave it... or simply blend one end of it with a dry brush.

I have used acrylic as an underpainting... but mainly paint alla prima, wet into wet. If the paint dries, I may add light glaze of linseed oil... but that is another technique. With small paintings, especially plein air, I like to finish it all at once.