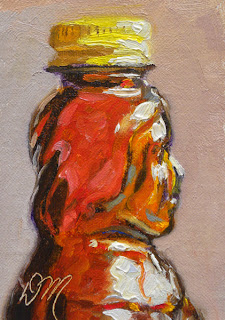 Mrs Buttersworth was cranky after spending the night in lock-up.  Back in the studio as she sparkled under the lights... not even a glimmer of a smile.  And not a word of thanks.  You'd think she'd at be grateful after I bailed her out of the slammer!
Rather than staring directly at her gloomy face, I had her stand sideways for a profile view.  Much better than staring at her beady eyes... or lack thereof.  Despite her stiff sense of suffering and foul disposition, she actually posed rather well, held still without wobbling or tipping over.
The painting's quite good, I think (although an artist's never sure about that).  It may not end up as a profile on a nickel, but it's not bad... not bad at all.  Flattered her much more than she deserved.

And she actually agreed to pose one more time... after I held the recycling bin over her head.

What a hoot of a story and great painting. I can't imagine painting something like that. . . kudos to you!

Very nice Diane. Also love the story along with these lovely little paintings.

Johnna, So glad you like my story... just silly things that pop into my head while painting something ridiculous.

Carmella, Glad to get your feedback on my story! My husband thought I was being too corny... but I'm just having fun.

Glad you finally caught Mrs. Butterworth! She's a danger to all who are watching their weight!

Thanks Linda, but a bit of bad news... another diet crasher's arriving soon. Hope you don't have a peanut allergy.

Love this series. You are really capturing the glow. And I am craving pancakes! :)