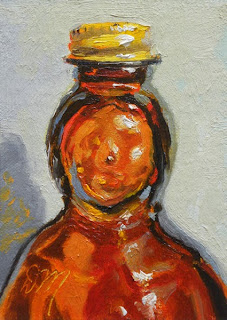 Mrs Buttersworth was arrested early this morning after an altercation with an artist for allegedly stealing a scene.  Carted off by authorities, she'll spend the night behind bars in solitary confinement.  If she swears to behave, she'll spend two days doing artistic service for the viewing public.

"Caused me a lot of grief," said the frazzled, bleary-eyed artist.  "But I'm willing to give her another chance if she'll hold still long enough without flipping her lid."

There will be two more Mrs Butterworth paintings, Snippets #5, and 6... maybe.

I love this Diane! I like how your color notes depict form rather than line. You are so talented!

Thanks, Kaethe! Your comment means a lot to me.

What a Fun and Funny Post! looking forward to the rest of the 30!

OKKAYY,,my mouth is druelling for pancakes and Mrs. Butterworth..DID you mean to do that on purpose? Yummy Painted Colors. Great Work!

Kelly! I promise they won't all be about food... although I've heard Mr Peanut may make an appearance.