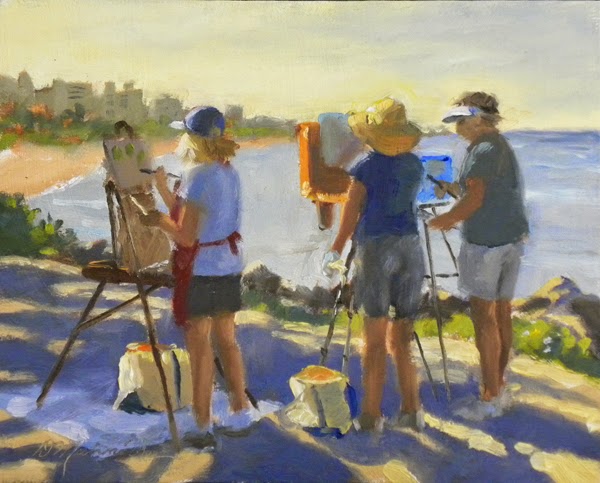 
At first, I couldn't find a spot to set up my easel.  A lot depends on foreground/background arrangements for composition.  There were a lot of background subjects... the Gulf, the jetty, Intercoastal waterway, and boats, but not many spots where I could visualize a pattern exciting enough to paint.

Passed an artist standing in the sun (said she smeared herself with sunblock) who was doing a fabulous watercolor of the restroom building across the parking lot.  Another artist was sitting on a bench and had just sketched the above painters in pen and ink.  It was as though she did my thumbnail sketch for this painting.  Loved the composition.  Thanks, Donna.

Unfortunately, I had arrived late and these three painters were finishing up and left soon after.  Made color notes, blocked in the scene and finished a lot from memory... and had to make stuff up!  I was really excited about how the sun struck their work bags, doesn't take much.  And later on I added more details and "flattened" some of my color patterns, such as the light and shade on the ground.

My first photo of this painting made the shadow pattern look livid blue.  Shot it again in two ways:  Outside in the shade, first with painting on the ground facing up.  Then propped the painting on a shelf and had it face out towards the light... now I know this way matches the colors most correctly.  There was a dramatic difference in the blue color!  Perhaps, when shooting the painting facing up, it reflects the sky color, even though it was in the shade.  The painting positioned vertically reflected the warm light which was most correct.

So nice! I like the depths of interest. I almost didn't notice the yellow sky because it looks so natural.

Regarding photos of paintings: Have you ever tried scanning? I get accurate results with the small painted postcards I mail to my grandchildren. (I like to keep a visual record.)

Thanks, Susan! Yes, wore my scanner out... it was great for small paintings, but I'm also working larger. Also need 300dpi at least, so don't want to purchase a new scanner when I have an excellent camera. Photographing art work is not that difficult... I was simply in to much of a hurry the first time. I also use Photoshop to match color and values, cropping etc.