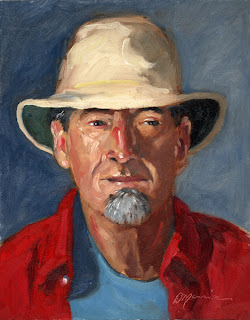 Diane Mannion, DENNIS, 10x8" oil
Artists in the Venice Portrait Studio at VAC were thrilled today to have a handsome model with lots of character pose for us in his golf hat!  My favorite way to spend a rainy Friday afternoon painting with artist friends.
This painting was first sketched in burnt umber with a small brush.  Then while the model took his break, I mixed up piles of flesh tones, shirt, and background colors.  The session was two and a half hours, but excluding breaks... only about two hours to paint.  There's never enough time!
2 comments: 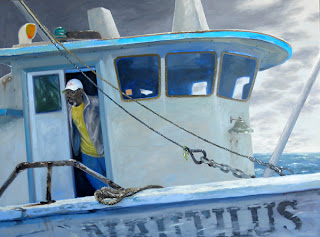 Diane Mannion, NAUTILUS, 36x48" oil
Captain of  shrimp boat, Nautilus watching approaching storm in the Gulf of Mexico.  These big paintings take a lot more time than my little daily paintings, but I did paint daily... for hours and hours.  Will be entered into several competitions this season.
2 comments: 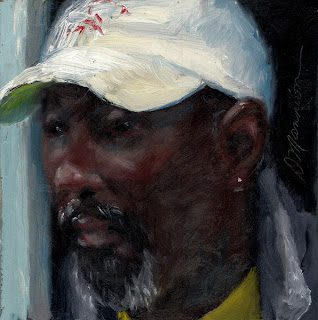 Diane Mannion, Nautilus Study, 6x6" oil
Head study for Nautilus, a large painting (30x40") that I'm working on.  This is the captain of the shrimp boat, Nautilus in the Gulf of Mexico.  Too busy painting to write much more today... deadlines, deadlines!
No comments: 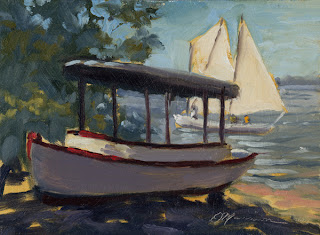 Diane Mannion, Spanish Point Boats, 6x8" oil
Quick demo study I painted during my Artists Bootcamp class this morning.  We had to paint inside because of the weather, so we did "pretend" plein air studies from some black and white photos I took at Spanish Point.
Started this painting by coating the panel with linseed oil and yellow ochre, then demonstrated a technique of "wiping off" the composition... barely indicating where the masses of darks and points of light would be.
Then using only red, yellow, blue, and white sketched in the areas with color.  Cerulean blue and white for the sky worked well with a touch of yellow ochre toning it down.  The yellow ochre was also a great help on the sails, only needed to add white.
Although the boat on the shore was white, I explained how the darks and lights had to be mixed to make a "darker" white for shadows.  Shared my favorite idea:  "If in doubt, use purple."  So, I mixed a purple to capture the darker value.  Mixed red and blue and yellow for the trim, which made a nice brown.
A few dabs of yellow to make a lighter green to highlight the trees, along with some lighter blue-green strokes to define the mass.  Also explained the miracle of "sky holes" in the trees, which are usually a darker shade of the sky (so they don't pop out).  Made the background softer and more blue to suggest distance.  Pumped up the bow of the foreground boat with a brighter red to make it stand out.
Discussed how I thought the center of interest was the sailboat... the brightest color set off by the darkest dark.  And noticed how the foreground boat also had strong values.  But the most interesting thing to me is the movement of the sailboat behind the foreground boat.  Maybe, there's a conflict of central interest?  Don't care, I like it the way it is.  Also mentioned edges... a important fundamental of painting.  Edges can be softened to indicate rounded form, can be lost and found, and can be sharp to pop forward.  Also talked about mixing color on the palette, putting down the strokes and letting them be with as little blending as possible.
The composition of this painting has a strong diagonal element of darks and lights.  The horizon is not dead center, but higher.
We studied CF Payne's Forms of Composition such as the "Suspended Steelyard, Three spot, Group Mass, Balanced Scales, the O, the S or Compound Curve, the Tunnel, and the Diagonal Line."  Some artists like to diagram their compositions beforehand.  I see composition as visual music... if it looks right, it feels right, then it's fine with me.  But it does help to keep some of the formality of classic composition in mind.  For example, my favorite is the S curve... which is great for beach paths and forest trails.
Color, composition, values, edges, brush stroke quality... almost all you need to know about painting.  Keep it simple.
This post is a long one!  Congrats if you made it this far, you get an A.  It's basically everything I stress in every class I teach.  And this last group of students has been a joy!
1 comment: 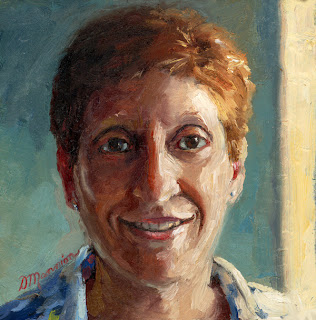 Diane Mannion, CATHY, 6x6" oil
When Cathy's around the lights go on.  Filled with energy and constantly moving... hard to get her to stand still long enough to snap a photo.  Mover and shaker at the Punta Gorda Visual Arts Center!
Painted over an old landscape with lots of texture.  Difficult painting, had two wipeouts!  A few beginning stages and a messy palette!: 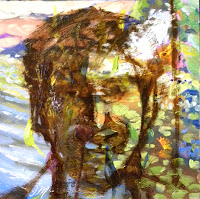 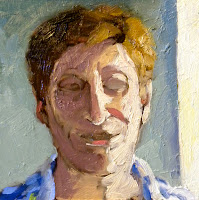 Cathy just before one of several wipeouts! 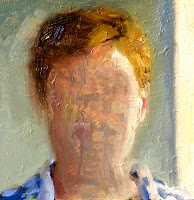 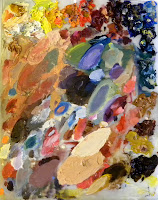 and a messy palette which may have
been why I struggled with this painting.
No comments: 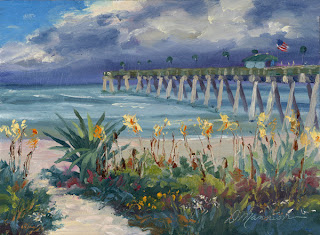 Diane Mannion, VENICE PIER RAIN CLOUDS, 6X8" oil
SOLD
After a fabulous week in NYC (saw Lucian Freud at the Met!) it was refreshing to paint with my plein air friends again.  This is also the beginning of our busy season with lots artists returning.  (WELCOME HOME, TERRY!)  It was difficult to keep quiet and not exchange news and stories while we painted, but we were able to chat a few minutes before we ran from the rain.  Artists really need to focus while working and not talk.  Difficult for some tourists to understand.  Many of us will meet again at the ArtSensation'11 in Punta Gorda, November 5.
Finished this painting at home from a snapshot that really did not capture the magnificent color and light of the real scene.  Added a few more sea oats (there were some off to the left, but using my artistic license, I transplanted them with my brush to make this painting more visually exciting.  Artists are allowed to do this... and don't even need a permit.)
No comments: 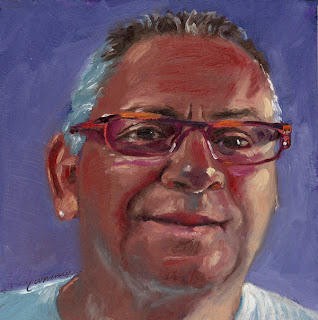 Diane Mannion, MICHAEL, 6x6" oil
Just could not capture the vibrant and colorful personality of this artist... will have to try again.  I like the way glasses glow though.  First stage sketch: 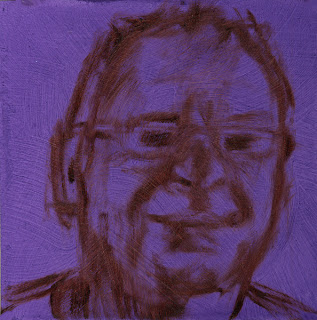 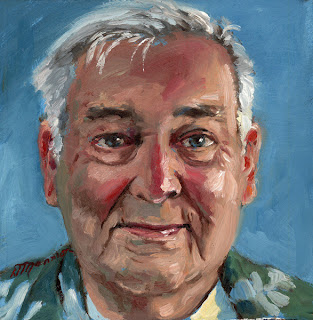 Diane Mannion, RICHARD, 6x6" oil
Retired Maine lobsterman, and three times courageous survivor of my Artists Bootcamp!  All those years of hauling traps and pulling lines were good practice for painting lines on paper and canvas.  A true and gentle artist with lots beautiful works still to come. 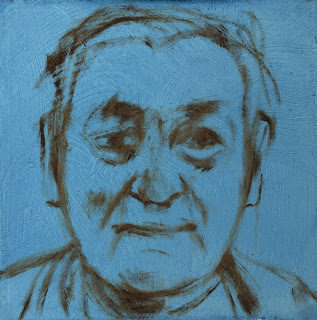 RICHARD at sketch stage
No comments: 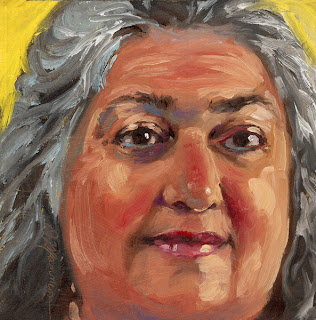 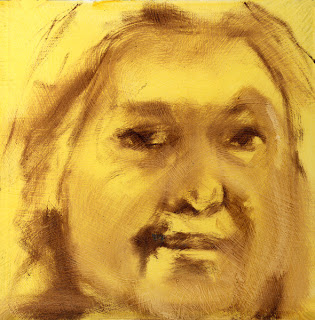 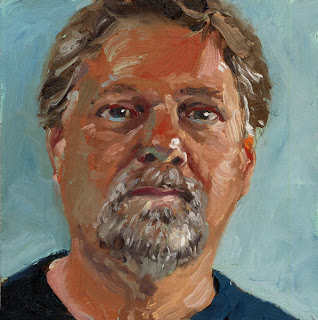 Diane Mannion, CHUCK, 6x6" oil
Another one of my talented and intense students.  Pushing the technique and color and trying to paint faster (no such luck).  Even though it looks like it was a speedy sketch... had to think about each brushstroke and color.  Continuing use of thick paint and minimal blending.
Here's what it looked like at the first, sketch stage level: 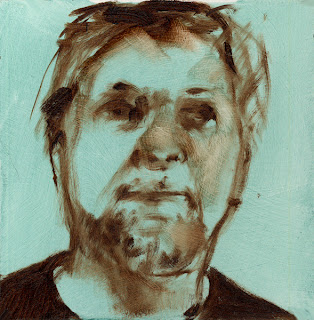