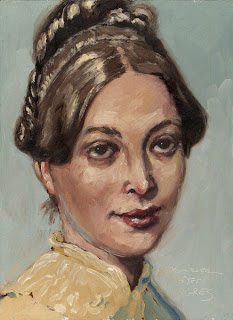 Diane Mannion, AFTER INGRES, 8x6" oil
My tribute to Jean-Auguste-Dominique Ingres (1775-1867).  Old Masters learned by making copies of older master's works.  A hundred years ago when I was an art student (still and always a student)... my teachers had me study Ingres's work.  This was a class project for my students to create a painting out of Ingres's drawing, "Portrait of Victor Baltard's Wife and daughter, Paule."
While researching Ingres, I discovered this great quotation: "Drawing contains three quarter and a half of what constitues painting"...Ingres.  Ingres considered drawing to be superior to painting.  His favorite medium was pencil on paper.  He wouldn't have approved of my little painting because he didn't like to see any brushstokes showing.  He believed a painting was a window into reality and thought evidence of the artist's work was a distraction.  But I don't agree with him... I love to see brush work, to me it's part of what makes a painting.
Below is the first stage of this painting which I "drew" with a brush using burnt umber.  A demonstration to my students that painting IS drawing... with a brush instead of pencil: 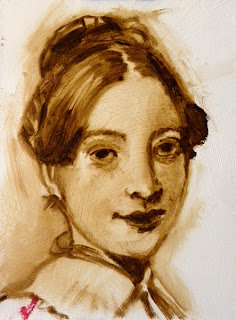 This is how the painting looked during my class demo, difficult to talk and paint at the same time.  I suffer from "exploding head syndrome" and realized later that more hair was needed, which would have the top of the hairdo right on the top margin... a "kissing" problem!  Had to give poor woman more hair in order to "bleed" off the top for better composition.  So there!   Two new artistic terms in one blog post.  Exploding head syndrome and kissing.   Now you know.  And the red stroke, bottom left (actually magenta) was an explanation to my students that the drawing on canvas can be done in any color.
If you would like to see a copy of Ingre's drawing, please do a Google image search, it's easy to find.  (Did not want to get involved with copyright rules to show it here.)
No comments: 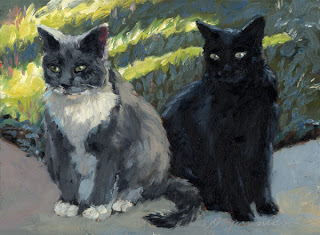 Diane Mannion, FAT CATS, 6x8" oil
While I was painting in a rather upscale area of the historic district in Punta Gorda, Florida... these cats decided I was something new and interesting to watch.  Their heads followed the movement of my brush strokes.  Actually, there were three cats lined up thinking I was quite entertaining to watch... until I turned and aimed my camera at them.  One immediately left with his nose and tail in the air, quite put off that someone would take their photograph in front of their very own house.  The two remaining, painted above, pretended that I was not there at all and ignored me to the best of their abilities.  Notice, no eye contact, just a sideways glance, even in the photo.  Only the tail tips flicked and the ears were held back like they couldn't stand to look at me.  They disappeared soon after.
Started this painting while teaching a class to demonstrate how to work from photos without becoming a gigantic copy machine. 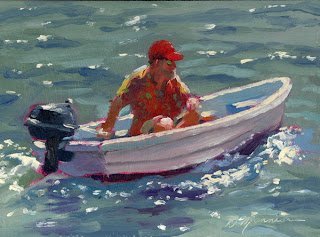 Diane Mannion, BEER RUN, 6x8" oil
Man having a wonderful time puttering about the Intercoastal Waterway near Lemon Bay, Manasota Key, Florida. Couldn't think of a title, first thought One Happy Fella, or Small Boat Big Man... then John and I thought of the perfect title at the same time! Beer Run, which is most likely what was going on.  This little boat passed by one day while I was painting near the docks, the man waved while I zoomed in with my camera before he got away.  Always helps to have a camera handy!
2 comments: 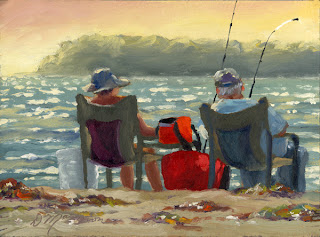 Diane Mannion, GOT FISH, 6x8" oil
Who needs fish when the spot is as gorgeous as this?  Couple spending the morning at Boca Grand Pass, Florida.  Couldn't resist painting the red nylon gear and lunch bags.  Oh, and loved the way the light was shining through the gentleman's ears.  Doesn't take much for inspiration to strike around here!
2 comments: 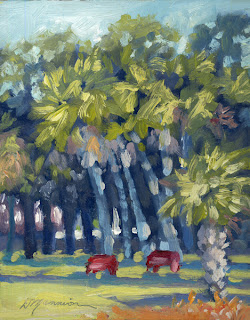 Diane Mannion, Royal Marina View, 10x8" oil
Even though I'm way behind in my Dailypaintworks.com Weekly Challenges, I decided to attempt the November Big Brush Challenge on Kevin Macpherson's AMO site.  And trying out these exercises help me decide how to torture my students in new ways.
Royal Marina View was painted with only a #12 bristle brush (which is about an inch wide)... even for details.  It felt like painting with a broom!  But it's a way of getting out of the comfort zone.  Had to cut out a lot of details and zoomed in, way in, on the scene.  Originally had a stone wall and water's edge along the bottom and a small bridge on the left.  Wiped out my first session which was painted on site.  Second version painted from a snapshot and memory.  Was forced to concentrate on patterns, masses, and values.  Had to use lots of thick paint (which is a good thing).  Great exercise but can't wait to get back to my favorite #2s!
1 comment: 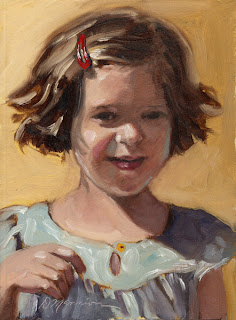 Diane Mannion, TOO CUTE, 8x6" oil
Painted for Carol Marine's Simplify Cute Challenge on Dailypaintworks.com.  An excellent challenge... create  a painting from a cluttered photograph (provided by Carol Marine)... simply simplify.  Wonderful exercise for artists using photographs as reference.  This painting also started as a demo in a portrait class I taught today, then finished at home.
2 comments: 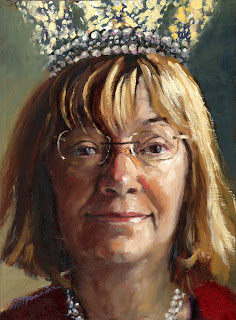 Diane Mannion, QUEEN MICHELE, 8x6" oil
It's so much fun painting portraits of people and friends I know!  This is Michele, Director and Queen of the Visual Arts Center in Punta Gorda, Florida... a FABULOUS place for artists!
I had been inspired by Lucian Freud's painting of the Queen (one of my favorite paintings which the Queen actually posed for!!!), thus the crown... and also a photo on the cover of the annual Women's issue of HARBOR STYLE magazine (March 2011) where the "Queens" of the local art world were featured dressed as royalty.  Michele was one of them.
No comments: 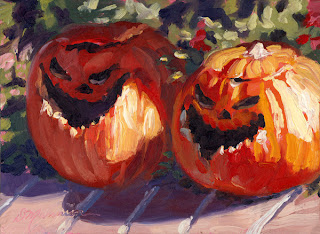 Diane Mannion, ONE WEEK LATER, 6x8" oil
Painted for a dailypaintworks.com weekly challenge.  These pumpkins were sitting in the sun behind me while I painted the House on Gill Street last weekend.  Having a private chuckle... couldn't catch what they said but I bet it was nasty.
2 comments: 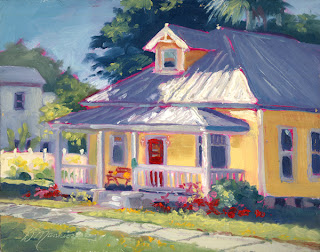 Diane Mannion, House on Gill Street, 8x10" oil
This painting won an award at the Artsensations plein air paintout yesterday in Punta Gorda.  Artists painted between 9am and 1pm on a beautiful, sunny and cool day.  It's amazing how much good work was created in such a short time.  While I painted, people stopped by to chat.   A few cats sat nearby fascinated by my brush moving across the canvas.
And at the other end of the street, artist Joe Palmerio painted a fantastic view of the purple house across from the Methodist Church.  He also won an award, well deserved!
As I look at my small reproduction online, I can see a few areas where my perspective is a bit wonky.  Easily fixed by adding a few bushes on the right side of the house.  There were no plantings around it, had to imagine the flowers out front.  Recently renovated, the building's grounds were bare except for grass.  There were garbage cans on the right side of the porch, not paint-worthy, so I added a bush.  But I'm pleased that I captured the morning sunlight and atmosphere of the neighborhood.  Punta Gorda's historic district is quaint and colorful...one of my favorite places to paint.
And here's the new, improved version!  What a difference a few plants make! 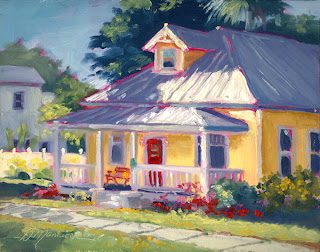