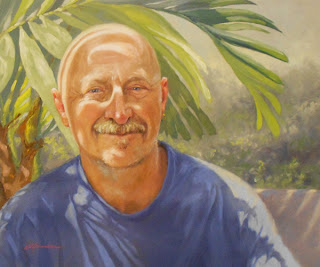 Diane Mannion, MICHAEL, 16x20" oil on linen
The benefit of a steady stream of houseguests is the availability of models.  Just had to paint the play of palm shadows and sunlight on Michael's head!  Below are the photos snapped at the end of each day, starting with day 2 because day 1 was a total wipe-out!  I think wipe-outs may be a way I figure out mistakes before I make them.  Even though I wipe the canvas... and feel miserable... something is learned in the process. 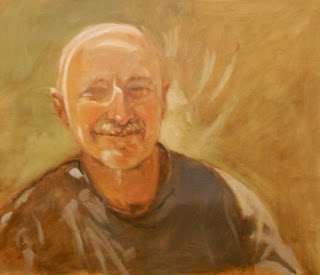 Day 2: Sketched over wipe-out with burnt umber.  Started blocking in areas with the Zorn palette (cad red light, yellow ochre, black and white).  Working from reference photos on my 36 inch flat screen tv.  Cropped and adjusted with Photoshop on computer and transferred to tv with a memory stick.  Painted standing up on restaurant cushioned mat.  Underpainted with Gamsol. 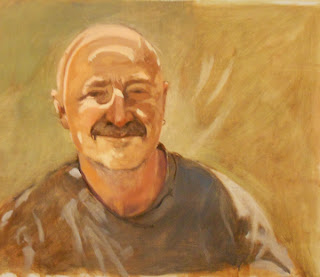 Day 3: Corrected the drawing by turning the painting upside down along with a black and white photo.  Still painting with oils thinned with Gamsol. 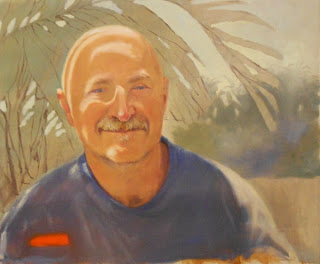 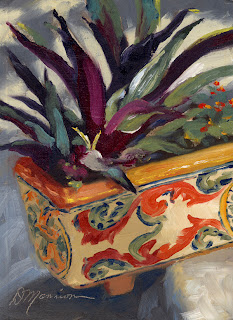 Diane Mannion, GAIL'S PLANTER, 8x6" oil
Fast (for me) sketch of a friend's Mexican pottery in the afternoon light.  Attempted to lay the strokes on and leave them with minimal blending. 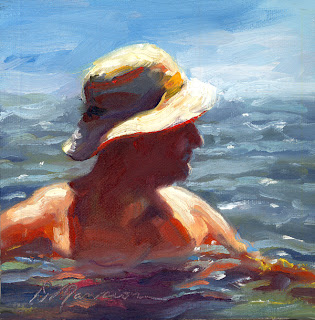 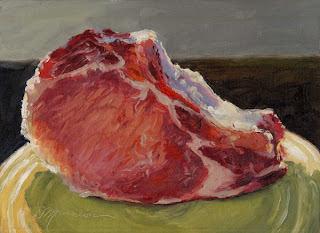 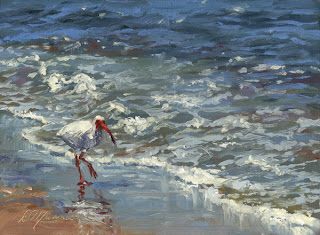 Diane Mannion, IBIS, 6x8" oil
Had a chance to paint a small one today, refreshing after working on some larger paintings that seemed to take forever.
And as promised, here's the final version of WATER PEOPLE along with the stages it went through.  Thought I just had to adjust the mother's hand but one thing led to another and I polished the painting here and there.  Could still be working on it if I hadn't said... Enough Already!  Sometimes, it's difficult to know when to stop. 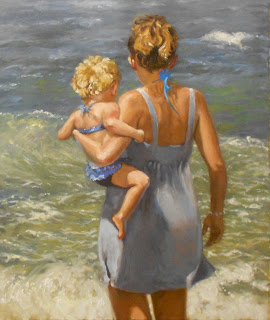 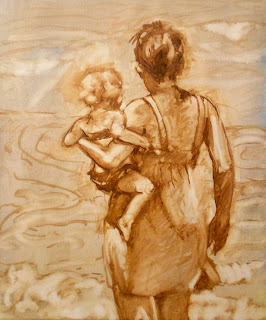 Stage 1:  Sketched over first day's total wipeout.   Could "see" what I wanted but the brush didn't even get close.  Maybe I learned something from my mistakes.  Was happier with this version and it was easier because I had a clearer vision of where I wanted the composition and rhythm to go.   Composition has to feel right visually in the way a piece of music has to hit the right notes.  I loved the angles and tangle of elbows and the child's knee and the way they played against the angle of the waves.  Changed the waves for dramatic effect. 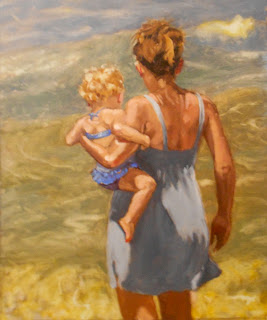 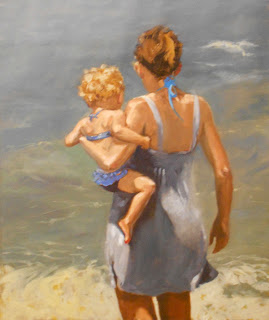 Stage 3:  Smoothed out and layered the underpainting with mid values.  This is one of those "ugly" stages where I worry if I can pull off my vision.  Fighting with values here. 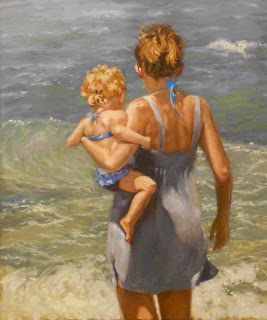 Stage 4:  And I thought I was almost finished... even posted it.  Decided to adjust the mother's right arm and add a few finishing touches.

Diane Mannion, Water People, 20x16" oil on linen
Was intrigued by the pattern of elbows and knee and the zig zag of waves... invented for dramatic effect.  Was happy with the accidental pattern of the distant wave echoed with the dark image in the froth.  (Little things that make artists happy!) Demo in next post.
6 comments: 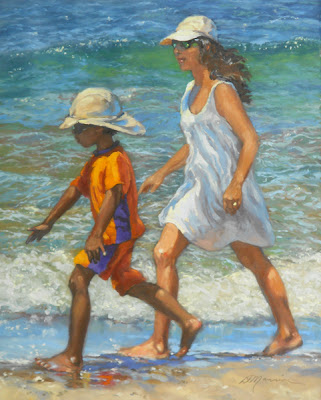 Diane Mannion, Here Comes Jackson! 20.5x16.5"oil
This one took longer than a day!  But I did paint daily for seven.  Every time I thought it was finished there was something else I wanted to change.  This is about seven paintings thick.  Wish I could paint faster!
The boy reminded my mom of her step-grandson, Jackson... thus the title.