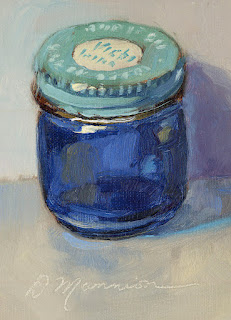 Diane Mannion, Snippet Series #2, 3.5x2.5"oil on linen
Had planned on painting outside but another rainy day kept me in the studio.  Hey, it's not just the rain, it's Floridian lightning!  Continued with the ACEO format... tiny!  When there's finally a break in the weather, I'll head out and paint some of these little ones as thumbnail sketches.  Would be interesting to do a few before starting a larger painting.
After "loosening" up my style for the last few months, it was relaxing to slow down and really look at all the miniscule details and color changes.  Painting from life instead of a photo is good exercise.  The eye sees so much more than a camera.  And still life setups, well... hold still long enough to study them well.
Did lots of squinting, trying to see the larger areas of color.  Enjoyed adding "extra" details just for the heck of it.  Attempted to work in patches of color, putting strokes down and not always blending.  Really tried to clean the brush by pulling paint off after every stroke.  Actually, two if I used both sides of a flat.  Used thick and thin areas of paint, letting the brushstokes show.  The more I looked, the more I saw and  would still be painting if I hadn't put the brush down and said, "Enough already!"
Sold.

Very cute snippet Diane. 2/1'2" x 3 1/2" is astounding to me. Snippets is an excellent description. The smaller the painting, the less details; the larger, the more... I'm a reference photo gal. My cataract surgery did that. Now I see more than I want to. Nearsightedness is a good thing for an artist.

Thanks, L.W.Roth for your comment!
Nothing wrong with using photo reference if you have the direct painting experience to back it up. And all that visual memory. These Snippets are painted from life for practice.

Thanks for sharing your thoughts and process in painting this... great exercise. So true about seeing more than a camera can possibly capture... I tend to get lost in details and I understand your need to just finally put the brush down and stop. :) Really enjoy your work!