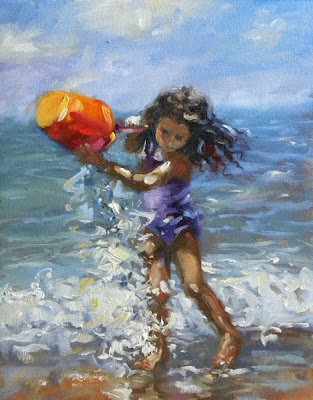 Teaching season is just about over here in SW Florida, so now I have time to finish some of the demos I started in class.  Some were wipeouts (difficult to paint and teach at the same time) but some had potential, like this one.  Here's the progression: 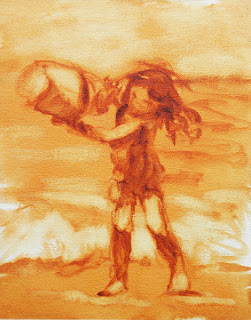 Transparent red earth underpainting.
This is how the demo looked after teaching a figure in the landscape class.  Painted with transparent red earth and Gamsol, then wiped off with paper towel.  This was the second attempt, first one had the child's feet too close to the bottom edge.  But that's the great thing about drawing with oils... so easy to wipe and start over.   And something magical happens at this stage when the smeared paint causes a sense of atmosphere.
Used reference photo I took at the beach while pretending I was taking a photo of  my mom.  Parents get nervous if you aim a camera at their children.   I make every effort to change the subject's appearance unless I have been given permission to paint them. 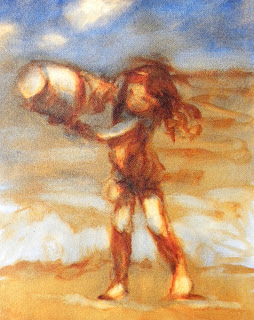 Ultramarine blue layer.
I don't work like this every time.  The transparent red earth layer had dried completely, so the transparent ultramarine blue glaze with linseed oil... helped to "oil-out" the surface and make it seem more like working alla prima (wet into wet) which is my preferred style. 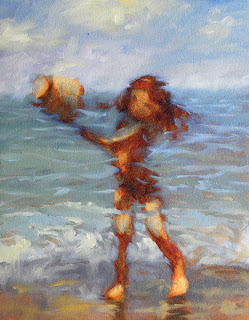 Background.
Worked sky, water, waves, and forground with full palette of transparent and opaque colors.  Painted "over" the figure, so edges could be softened later.  Used red, yellow, blue, and white in everything!  Clouds, sky, water, etc.  Even used my "party" colors... permanent rose, viridian green, and dioxazine purple.  Yellow ochre, ultramarine blue, and viridian green are great for water, toned down with yellow ochre or transparent red earth.  Used Old Holland King's Blue (ultramarine and cerulean blue work just as well), and white in the sky.  This blue also highlighted the waves.   Clouds and breaking wave highlights... Indian yellow (sunshine in a tube) and white.  I know this is a lot of information about color but I'm obsessed. 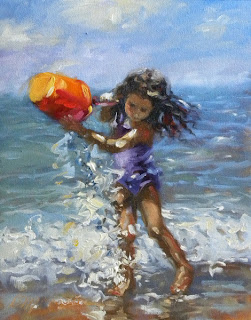 Finished.
Used cad red highlight on her shoulder and other shadow areas.  Flesh was transparent red earth, yellow ochre, white, speck of viridian, and ultramarine blue.  Touch of orange on cheek caused by glow from pail.  Indian yellow and white in highlights and splash.  Photo reference had pink bathing suit and red pail, I used the complimentary colors of orange and purple because I thought it would make a better painting.  Remember:  When using photo reference... we are not giant copy machines!  Take reality and make it your own.
I kept the brushwork loose to express motion and the breezy style of a plein air sketch.  So the next time you go to the beach... don't forget your camera.  And take lots of photos of your "mom."

That is such a fascinating process and you've described it so well. I'm really impressed at your skill, Diane. This piece is exquisite!

It's so nice hearing from you, Katherine. And I'm amazed that anyone other than my mom reads this stuff! Thank you for your comment.

A very interesting post and I really like the boldness of those highlights on the little girl's arms.

Thank you, Shirley. It's nice to know you read my post!

Diane your painting really caught my eye today. It's glorious! So much movement! Thanks for taking the time to talk about your color palette. I've learned from it.
Best,
Brenda

Thank you, thank you, Brenda! I love teaching and sharing what I know. So glad you learned from it. It's all just so much fun!

I love seeing your process here and the swing in the figure is so right! great post and painting!

Mary Maxam, thank you for your comment! I'm an admirer of your work, it always catches my eye.

Mary Maxam, thank you for your comment! I'm an admirer of your work, it always catches my eye.

Love your art and your process! Thanks for sharing, Diane.

Thank you, Sandy! I don't work the same every time... it is amazing how different approaches to technique can push the results in new directions...all part of what makes painting so fascinating.