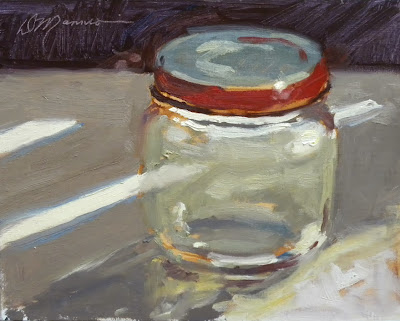 A quick demo painted while teaching at Ringling Englewood Art Center today.  Passed around a few baby food jars and the assignment was to paint them larger than life.  One student set his jar up near the window where shadows were cast by the window shade.  It was also a partly cloudy day so the light kept changing and the shadows moved fast!

Keeping in mind that painting glass is easy (ha)... just think about the shapes and values.  The same principle applies when painting a portrait... thinking only of the shapes that you see, not that the thing may be an eyeball... makes it a lot easier.

Set my easel next to the artist that planted his jar in the sun and had a go at it.  Was thrilling!  Too bad I also had to stop and teach once in a while.  A lot was painted from memory because light and shadow changed constantly.  Concentrated on the basic shapes and hit a few light and color notes when I saw them.  The same thing happens while painting the Gulf from life... see an effect that happens a few times, memorize it, then attempt to capture it in paint.

A couple of new artists in my class have had medical illustration backgrounds and their skill level is evident!  It's a joy sharing knowledge with artists at any level.  The higher the skill the harder I teach!  Or the higher the skill level, the more difficult it is to teach something new to a student that thinks they know everything.
Does that make sense?

I love this little jar... lovely neutrals and I love keeping it simple!

Thank you, Karen! It's one of those paintings that almost painted itself... yes, it happens once in a while. I was so busy teaching, I hardly noticed what I was painting. Maybe it's a good thing to disconnect the brain and let the eye and hand do the work for you. I was surprised I really liked it the next day.