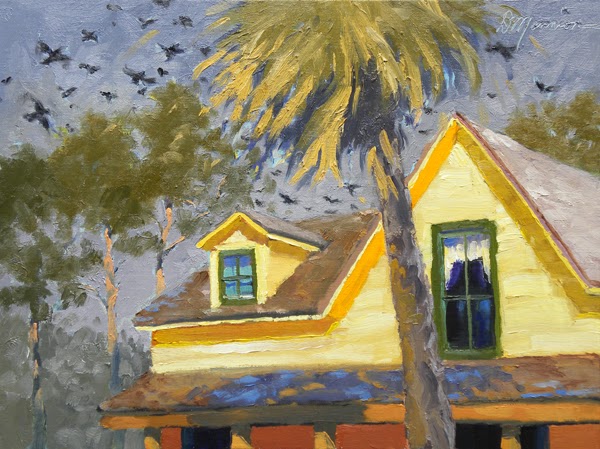 Sometimes I can't let a painting go... in this case, wish I had.  Thought I'd share some of my creative suffering, after all, we learn by our mistakes, right?  Reacted too many times to my own work, and by re-acting... re-painted too many times.

This is the Bidwell House, located in Sarasota, built in 1882 by Alfred Bidwell who was implicated in the murder of the local postmaster. 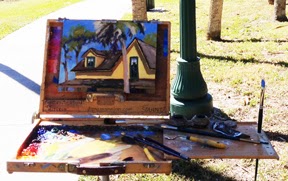 On location setup... should have left it alone!  It's an impression of that time, not the historic time.
Unfortunately, I went home and painted over it... a few times!    Felt it looked too cheerful to reflect the true history of the place.  Thought adding crows would give it a creepier feeling.  Sigh. 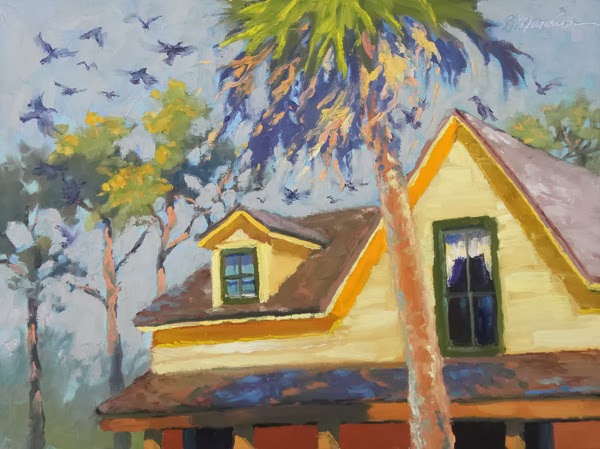 (One level of re-painting.)
While re-acting to my painting, I realized my plein air study had morphed into a studio painting which in turn... turned into an illustration.  Not that there's anything wrong with illustration, but I'm not happy with the results here.  Next time... leave  plein air studies alone!  Let them simply be studies.  I should have started a new painting, instead.  I over-re-acted!!!  Ack!

This composition is extremely pleasing. The "old Florida" ambience reaches out and grabs me. The flock of birds are the perfect finishing touch, taking the painting to another level.

I appreciate your comment, Susan. This painting is deep... about five layers.

Thanks for sharing your trial and lesson with this painting, Diane. It is great that you took a picture of the first version for a comparison! I like both of them for different reasons :)