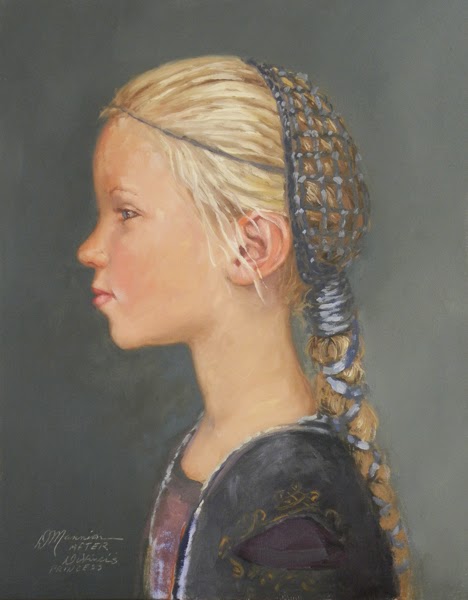 While teaching portrait painting this week, my assignment was to use Leonardo Da Vinci's (fake?) Princess as a starting point for a painting.   The idea came from a painting I did in 2010 which I've included here along with the story from that blog post. 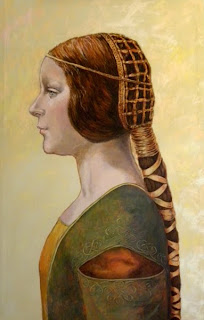 Each year members of the Punta Gorda Visual Arts Center reproduce historic paintings to be sold at auction to support the center.  One year it was Lautrec, this year it’s Leo vs Mike...  Leonardo da Vinci and Michelangelo.
While researching da Vinci, I came across a beautiful profile of a young woman that had recently been discovered.  Once thought to be a  19th-century painting,  “La Bella Principessa,”  had been purchased in 2007 by a Swiss collector for $19,000.  In 2009, forensic art experts found a fingerprint of da Vinci in the background.   Multispectral scans showed layers of work that resembled da Vinci’s style.  Many leading art experts agreed it was the real thing.  It’s value soared to $160 million.
“La Bella Principessa,” was painted on vellum with black, red, and white chalk, pen and ink and watercolor.  Mounted on an oak panel, it is only 13” by 9.”   (My reproduction is five feet tall. )  The girl is believed to be Bianca Sforza,  the illegitimate, conveniently changed to legitimate daughter of a duke of Milan.  In 1496, at age 13, she was married off to a captain of the duke’s military forces.  She died a few months later, possibly from an ectopic pregnancy.
When half finished with my reproduction, I came across an article by Richard Dorment, recently published in the Telegraph, UK, April 12.  Here’s the link.  Well worth reading!
http://www.telegraph.co.uk/culture/art/7582591/La-Bella-Principessa-a-100m-Leonardo-or-a-copy.html
Richard Dorment lists many reasons why he believes the painting’s a fake.  The detail that stood out to me...  the same expert who used a fingerprint to prove a Jackson Pollock painting which later proved to be a fake,  was the same expert that found the da Vinci print.  I think too many people involved with this painting have financial interests to gain.
I finished my reproduction which has been purchased.  It will not go to auction but the art center will gain.
I now consider My La Bella Principessa a “real” painting of a fake.
Please follow the links to see the original? Leonardo painting (not sure about copyright laws to include image here).  Or simply Google Leonardo Da Vinci's Princess for images.