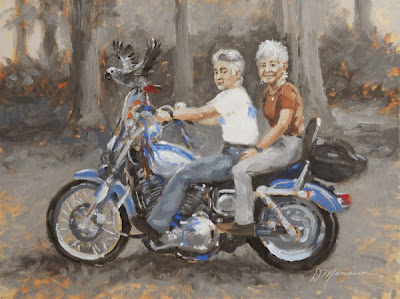 Portrait of my friends, Julie and Joan...on their Harley with Harley, their African Gray parrot.  Promised to paint this as a wedding present, glad it's finished before their first anniversary!

At such a tiny scale, it's simply a caricature of my friends, they're actually much more beautiful than this shows. Told them, that if they hated it... I'd paint their house, instead.  We'll see.

Technical notes:  Limited palette!  Used ONLY ultramarine blue, red iron oxide, and white.  Just a touch of cad red on the parrot's and bike's tails.  And a few glints of cad orange on a light and near windshield.

YOu did such a great job with the limited palette. They are going to love this one and the parrot quite stole my heart.

Thanks Julie Ford Oliver! So far they like it, and love the parrot. Was fun experimenting with this limited palette, forces eyes to "see" values.