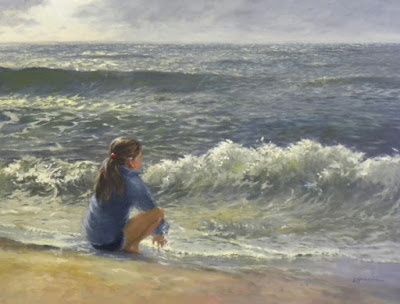 Growth of a Painting

Something about a few small sketches I did of my granddaughter kept haunting me… had to follow my instincts and explore the possibilities.   After a long and arduous journey, have found what I was after and at last, am ready to let this one go.

Part 1:  My original small sketches, the first quick block in with payne's gray.  Was excited about the figure but after working on it in the following stages, lost the "older" child of the block in, appeared to look too much like my granddaughter.  I wanted the figure to be someone I didn't know, a figure made up from my imagination, more "iconic."

Part 2:  Final stages.  First major breakthrough happened when I changed the figure to an older child.  Second breakthrough when my husband came in and wrinkled his nose, "Is that girl going to be hit by a giant wave?"  His comment caused me add a horizon and sky.  And final stages, added details and lightened the sky.  ***Having a problem photographing this painting!  iPhone shot came closest, last image. 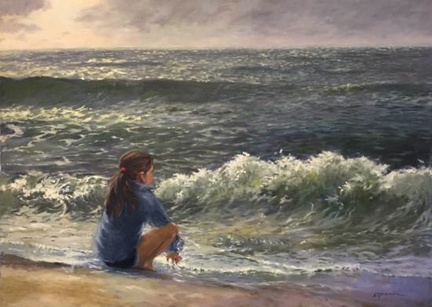