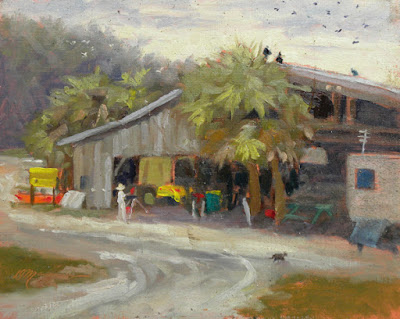 It's been a while since I've been outside painting, didn't know how much I missed it until this morning.  Painted with the Peace River Painters group and spent half the time walking around chatting with folks I hadn't seen since last season.

About twenty to thirty artists were scattered all around the area.  Was disappointed that it was cloudy at the Placida Fishery, but at least the colors and values stayed the same all morning.

Caroline Jasper set up in front of the crab shack and kayak rental place with a yellow Corvette inside.  I liked the way her figure gave the scene a sense of scale.  Vultures sat on the roof either waiting for crab scraps or for one of us to drop.

Cats roamed everywhere so I painted one in and while I was painting it… a cat walked right into that exact spot!  And one lucky cat had a narrow escape when chased by Duke, the black lab.

My friend and neighbor,  Johan Bjurman painted across a field with his freshly adopted black lab, Duke.  He and his wife went to the Humane Society to adopt a cat and came home with an eighty pound lab instead!

I brought my standard poodle, Shadow along and they were politely introduced.  Gave Duke another bag of homemade dog cookies.  Shadow enjoys sleeping on the back seat while I paint out of the back under the open hatch of my Honda.

So… Duke (after the cat chase) was tied to a large rock which he could pull around a bit.  When it was time to take our paintings to the show-and-tell area, Duke ran across the field dragging the rock.  His leash tangled around my legs while I was holding my easel with painting in one hand and Shadow on her leash in the other.

Someone grabbed Duke while I picked my painting up which had landed face down on the sandy road!  URGH!  Well, gives it some character and a story to tell.  When the paint dries, I'll brush off more sand, most of it's on the right.  Oh, the adventure and excitement of plein air painting! 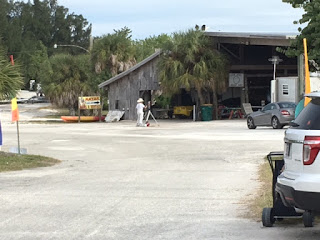 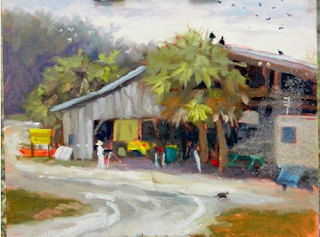 Before I brushed some sand off 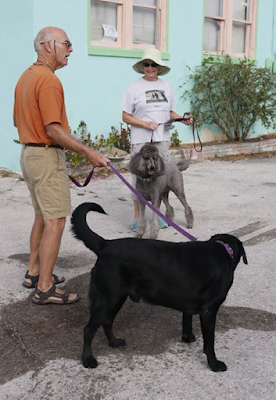 Love this photo Susan E Hoffman took of me and my Shadow
and Johan Bjurman and Duke!