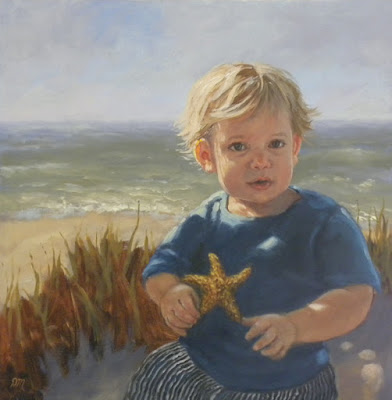 Younger children are far less self-conscious when having their photos taken.  Once they're about four (Ryn!) they become actors trying to please the camera too much with exaggerated smiles.  Ryn was the second portrait in this series and it took bits from six photos to paint her, an eye here, smile there…

On the other hand, Will, the first portrait was so well practiced he fell into the professional photographer's requested cheesy smile.  Had to take many shots to get a more natural expression.  After a dozen shots he told me, "Now, that's enough."  What a hoot.  Fortunately, it was enough.

So back to the two younger, pre-self-conscious children.  Jack at 29 months and Fritz at 17 months.  It was much easier photographing their pure innocent character.  Caught that wonderful sunlit ear glow in both!  And having their mommies there helped a lot.

Had to work from photo reference because children don't hold still and these children live far away.  Photos had to be taken during their brief visits to Florida.  The backgrounds are 90% from my imagination, plenty of plein air practice helped, also many years as an illustrator making things up from  visual memory.

I'm so thankful for having the honor of painting this joyful family!  Four more to go, teenagers (yikes) which I'll report on towards the end of the summer.