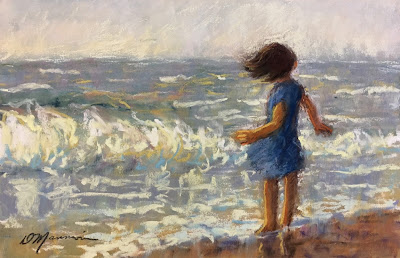 Sometimes, it's not easy.  Some of my recent pastels have worked out smoothly without many corrections... Fish for Supper, the last post was one.  Pastels take the image in unexpected directions, Sea Tickle as it is, is not where I wanted it to go and I'm not happy with where it went.  Darn pastels!

Biggest problem I had was not having the right color and value for water, a silvery blue gray.  Had to do a lot of mixing, then overworked.

Simply had to stop after so many brush offs and restarts.  Got to the point where I hated it, then liked it and then hated it again.  A lot of paintings go through an UGLY stage and then can be "finished" at a more acceptable stage, this one barely made it.  It's not my best.  Only posting it to share the struggle and perhaps help someone else going through the same thing feel better.

Not every painting or drawing will make it into the Met... so just have fun, lighten up, and LET IT GO!

Scribble in Moleskine of figure 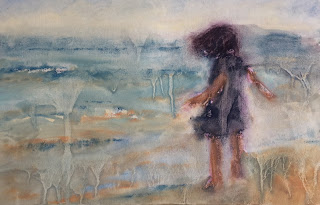 Had most fun at this stage!  And like it the  most!  Simple water wash of roughed in pastel that I let drip on Uart 400 taped on four sides.  Let dry in the sun and buckles flattened out. 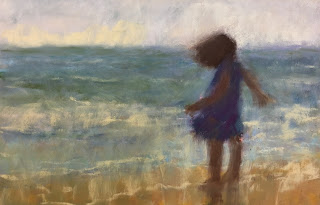 One of the layers on top of the water wash, brushed off in frustration.  But still like this more than the finish (or the stage that I gave up on). 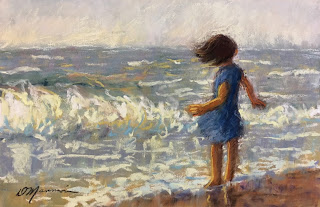 The stage I gave up on!  Must have learned something from this?
It's just practice for the next one.  Instead of reworking this one, I should start over.  I like the water in the above stage better.  Let it go....