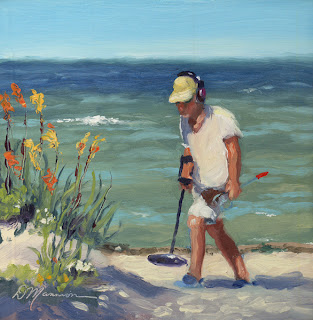 Diane Mannion,  Treasure Hunter, 6x6" oil
A popular sport on Venice Beach!  Almost used the title John suggested, "Supplementing Social Security" which is probably closer to the truth.  This man passed by while I was painting but he was too far away to ask if he'd found anything.  And he wouldn't have heard me anyway, with those earphones wired to his detective device.  Noticed he wasn't carrying a bag of loot, but bet his pockets were filled with gold rings and diamond earrings.
First time I painted on Ampersand Gessobord.  Took a while to adjust but like it a lot.  Very slick, might have been better to wait for underpainting to dry overnight to finish, but I like to finish the daily quota and piled the paint on thicker.  Brushstrokes stand up beautifully on it's slick surface for those last, dramatic finishing touches.  It's closer to working on fine portrait linen, which is also slicker than regular canvas.
I often make my own gesso boards using three layers of extra heavy gesso and let the brushstokes show for a rough effect.  Depending on what I'm painting, each surface has its place and I'll definitely add Ampersand Gessobord to my arsenal.

A beautiful vacation painting. It brings to mind all the sensations of being at the beach in the summer. Thanks for the information about surfaces, that's very useful!