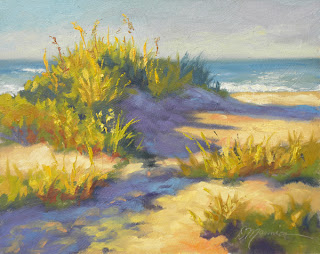 Diane Mannion, Morning Beach Light, 8x10" oil
Buy here.
Another demo while teaching "how to start a painting."  First a thin wash of ultramarine blue and burnt sienna was painted over the entire canvas, then with OMS (odorless mineral spirits or Gamsol) and paper towel... the composition was suggested by wiping out lights.  More dark blue and sienna added where dark masses would be.  Finally,  everything was "blurred" with a paper towel suggesting atmosphere. Took about ten minutes or less for this stage.

Second layer, blocked in color masses starting witt sky and moving forward... sky, water, shadows, greens, and sand.  Connected shadow masses... the purple shadow moves along the dunes in an "s" shape.
Final layer painted using warm tones to "push" the sunny sand patterns.  Used sesame seed size bits of red, yellow, OR blue in everything to tone it down and push colors in warm or cool directions.  For example, a blue sky puddle on the palette had a string of red, yellow, blue, or white added next to it...all in the value needed for the sky.  Used burnt sienna and ultramarine blue to tone down the greens.  Clouds and waves aren't white... yellow, red, and blue are added in tiny amounts.  I made the value of the sky darker to make the lights in the sand appear brighter.

Softened the horizon for it to recede, even if it's softened more than actually "seen."  Added highlights, sea oats, and sunstruck grasses last.  Sometimes used a palette knife for these but sparingly.

Happy with this one!

This is really lovely. I like the yellow/violet combination. Thanks for sharing your process!

This was a great post and an awesome painting! Everything about it is so perfectly executed and the overall effect is wonderful! I'd love to see that painting on a wall every time I walked past it, it would make me just feel good inside!