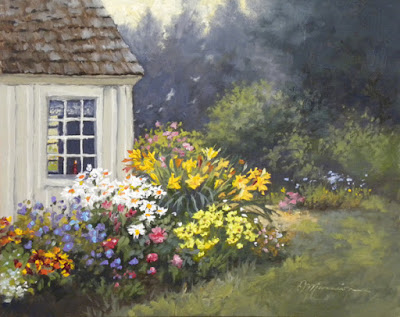 Lightkeeper's Garden, was painted on top of a plein air study done on location at the Marshall Point Lighthouse Museum.  Or perhaps, I should call it a painting started on location then finished later.  (Warning: More ranting and raving about this artistic conundrum below.)

Artist, Beth Bathe had been painted in the background of this scene, then later (after Mary Erickson's gentle critique) I wiped her out (sorry Beth!).  I agreed with Mary, the figure took the focus off the flowers which were the original concept of my painting.

It's impossible to study the brushstrokes in Andrew Wyeth's tempera paintings from six inches away and not be influenced!  Although I had seen NICHOLAS (Wyeth's 32x30" tempera portrait, 1955) many times in reproductions, nothing came close to seeing the original at the Farnsworth Museum in Rockland.  Every hair on Nicholas's jacket and head... clearly and patiently defined.

With all the rush and hustle of the current "plein air" scene, many artists have turned into entertainers turning out quick-draw paintings in two hours.  Rather than viewing these works as studies or sketches, they're slapped, wet into frames and sold "as is."  I know, I'm guilty as charged!

The beauty of plein air painting is the exuberant spontaneity, capturing fleeting light, color, and impressions of a moment in time.  I will continue to dash out two hour studies as the vital reference tools they are!  The change in my thinking about plein air painting is to not worry about "finishing" a painting on location.  Although, once in a while it does happen...

Plein air studies have to be small enough to capture a lot of information in the short amount of time before the light changes.  Larger studies have to be taken back during the same conditions several times.  There's also the problem of wind, even a small gust can turn a canvas into a sail.  The solution for me is to work small and use several references, photos (gasp!), sketches and notes.  Then work in the comfort of my studio...  AND SLOW DOWN!

Never heard of anyone accusing Wyeth of overworking his paintings...

Another Wyeth story:  Years ago, I was in a crowd of people lined up and led through an exhibition of Wyeth's paintings in New York.  I witnessed a woman telling her friends,  "I know how he painted this, with a stick!" as she scraped her long plastic finger nail across the surface of a Wyeth tempera!

Thank you for your patience, Dear Reader, for scrolling this far down!  I promise, next post, Part 10 will be the last of my week in Maine painting adventure.  But may take me awhile to finish the painting!