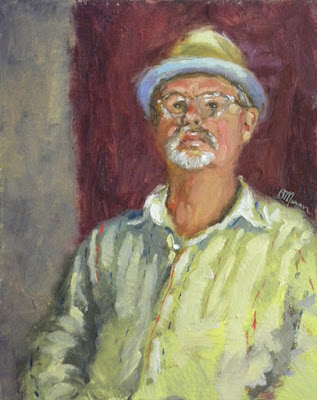 Painted on top of an old oil portrait which I didn't like.  Used white oil paint tinted with Indian yellow to paint over the old, horrible portrait leaving the rough texture as it was.  This background treatment was completely dry before I started.  There are patches on bottom right that have been left uncovered.
The original portrait was painted on thick gesso on masonite allowing the gesso brushmarks to show.

Started with a color block-in method rather than drawing the face first.  Wanted to capture the gesture of the pose as a figurative study rather than a simple face study.  Wished I had had a larger board because I originally wanted to include the hands.  If I had, the head would have been too small for detail.  There is only so much that can be painted in two hours, probably less if breaks are counted!

Thanks, Sue! I appreciate it.