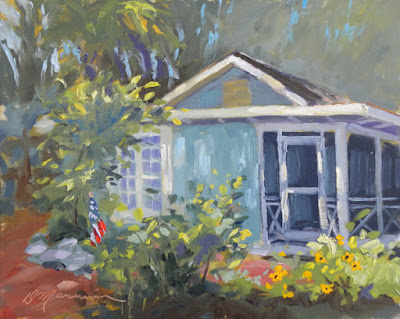 A Cracker House is a Floridian style built during the 19th century, woodframe, porch, and metal roof. Unfortunately this house had had its roof replaced with modern asphalt tiles.  The term "cracker" originated from cowmen in the 1800's that herded cattle by cracking whips.

Painted with the Peace River Painters yesterday at the Bay Preserve in Osprey.  A couple of hours is only enough time to capture color notes, a feeling of the place, and create a loose sketch.  I could have finished this from photo reference, but decided to leave it as it is... simply a record of a pleasant morning painting with friends.

Added the yellow flowers on the bottom right and broke up the triangle of the roof line later.
The roof was in shadow when I started, the photo below is how it looked with the sun on it.  Decided to leave it alone!  (Don't chase the light!)  The huge stand of bamboo in the background, blocking out the sky was a challenge. 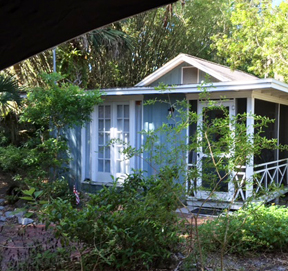 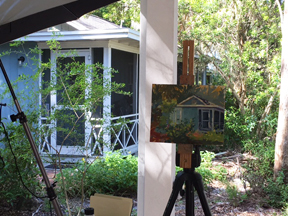