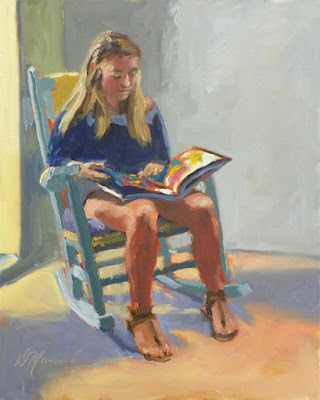 Instead of painting at Manasota Key with the Englewood Painters, we had a unusual early morning rainstorm (almost like clockwork, rainy season storms are most often in the late afternoon), so I had to paint in the studio instead.  My model, Megan posed for three fifteen minute studies last time here, so I decided to work on this one.

I suffer from exploding head syndrome!  Happens when I start a figure at the head and suddenly can't get the feet to stay in the canvas, or the top of the head bleeds off the top, a violent handicap.

My first attempt had the feet leaking off the bottom so I wiped it off.  Second attempt, I forced the figure to stay inside the frame, but the feet still looked too big.  Easy fix because I only worked in one color, red iron oxide until I got it right.

I reached the block-in stage with this painting by painting on top of the oxide sketch.  Could noodle and polish but this is an exercise in putting down color and values and leaving them and I like the way it works... go figure!